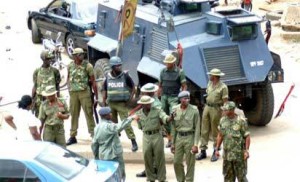 LEADERSHIP WEEKEND checks confirm that the suspects were arrested by DIA when they sneaked into the FCT to perfect and execute the heinous crime.

Though the identity of the suspects were not revealed, our source said the DIA has already taken the eight men into custody and are currently undergoing screening and interrogation, adding that useful information is being extracted from the suspects.

The Nigeria’s capital of Abuja had in the past come under several bomb attacks, mostly carried out by the dreaded Boko Haram group which has claimed responsibility. No less than 30,000 lives with properties worth billions of naira have been lost to the dastard acts of this group of terrorists.

Some of the places attacked by the terrorist group includes the United Nations country office in Abuja, the headquarters of the Nigeria Police, Emab Plaza located in Wuse 2, Nyanya motor park, as well as the popular Abacha barracks, all within the Federal Capital Territory.

Meanwhile, seven persons have been confirmed dead when two suspected female suicide bombers detonated bombs at the Malkohi IDP camp at about 10:50 am Friday, killing them and five others while 13 people, including four NEMA officials sustained various degrees of injuries.

The bomb explosion which is the first of its kind in an IDP camp facility in the state has thrown the inhabitants into pandemonium.

Our correspondent gathered that many of the displaced persons in camps blamed the attack on security operatives, whom according to them, failed to screen new IDP’s before admitting them into the camp.

Investigations by LEADERSHIP WEEKEND revealed that not less than 300 new IDPs from Sambisa forest and Madagali local government were brought into the facility less than 24 hours before the bomb explosion took place.

Confirming the attack to newsmen yesterday, the Adamawa State commissioner for information, Comrade Ahmed Sajoh said seven of the victims have been confirmed dead while nine others including four NEMA officials sustained various degrees of injuries.

The commissioner stated that governor Muhammadu Umaru Jibrilla Bindow has directed the state emergency management agency to foot the medical expenses of the injured.

He said an unaccompanied toddler was among the dead victims and expressed sadness that even those on humanitarian service were not spared by the fury of the suicide bombers.

Sajoh added that the state government is working in conjunction with all security agencies to ensure a water tight security around all IDP facilities in the state, noting that the security personnel are currently re- screening all the IDPs at the Malkohi camp.

“We have discussed with security agencies on how to fortify all the camps in the state and a re- screening of the IDPs is currently on going,” he said.

He added that the governor who was in Kaduna State for official visit was seriously disturbed by the incident and promised to do all within his powers to secure the state, calling on residents to keep vigilance and report any suspicious persons to security personnel.

In a similar vein, Adamawa State commissioner of police, Gabriel Adaji has assured that his men will strategise to ensure that such ugly incidents do not take place again.

He noted that the police will re- screen all the IDPs in the affected camp and ensure that his men are deployed to adequately secure a part of the collapsed perimeter fence.

Also the Adamawa State coordinator of the National Emergency Management Agency, Mallam Sa’ad Bello said he suspected that the explosion may be caused by female suicide bombers, adding that the bombers may be among the 298 IDPs brought to the camp from Madagali or the 17 IDPs brought from Sambisa forest on Thursday evening.

There was an error retrieving images from Instagram. An attempt will be remade in a few minutes.

There was an error retrieving images from Instagram. An attempt will be remade in a few minutes.